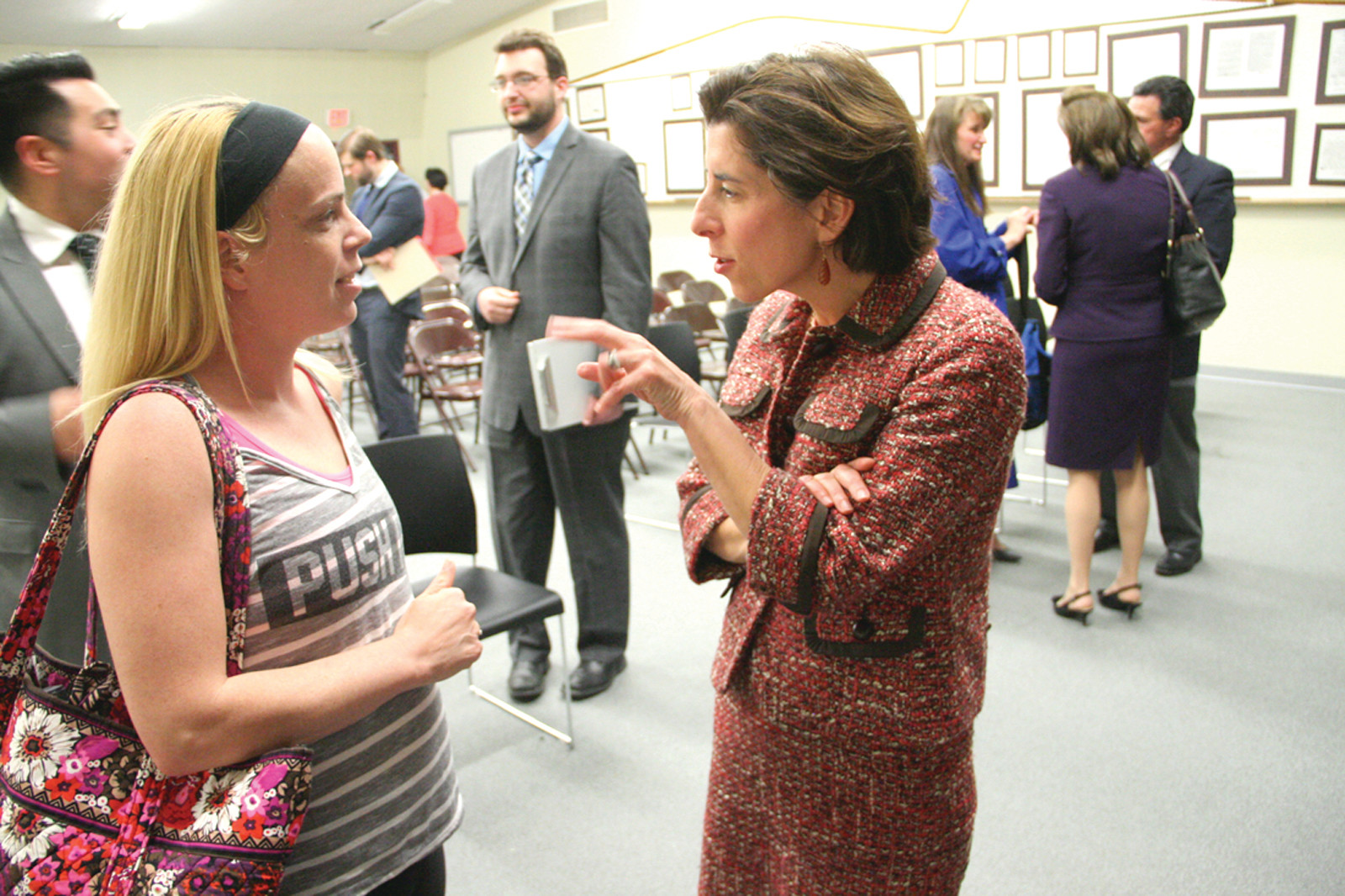 Governor Gina Raimondo kicked off a â€œcommunity education conversationâ€ Monday night with a story from her childhood. She said her father carpooled to work, to a factory that offered work for everyone, whether or not they had a degree.

“I wish I could be at the time, but I can’t and we can’t pretend we can,” she said. “We need to make sure the Rhode Islanders have the skills they need to be successful in this new economy.”

Raimondo believes upgrades from kindergarten to college are the best way to ensure residents the “skills that matter for paid jobs.”

In the proposed budget, Raimondo set aside funds so that students in all public high schools can take the PSAT and SAT for free in school. The full-time universal kindergarten is funded. Likewise, she wants to expand the credit university courses that students can take while in high school with her Prepare RI program. She said the best way to make college more affordable – and therefore more accessible – was for students to start for free while in high school, and graduate with a semester or two of work under their belt. The proposed Rhode Island Computing Program (CS4RI) would aim to improve computer classes in all public schools from Kindergarten to Grade 12, using partnerships with local business leaders as well as national organizations. such as Code.Org and Microsoft.

Raimondo explained that the average salary for a basic computer science job is $ 70,000 and yet only 42 public school children took the AP Computer Science exam, none of them were of color. .

â€œIt is a moral imperative for all of us,â€ said Raimondo. â€œEvery child deserves the opportunity to be successful in today’s economy. ”

Wagner and Raimondo are also looking to roll out a â€œboldâ€ empowerment plan to allow individual schools to have more autonomy and flexibility in decision-making. The plan would give educators more freedom to innovate at the school level, because â€œteachers and principals know what is best for their childrenâ€.

“Thank you for recognizing that teachers and principals know what is best for our students,” said Darlene Netcoh, head of the English department and teacher at Toll Gate High School. “I think our school committee would do well to remember that.”

On Monday, many speakers praised the governor and Wagner for earmarking more funds for special education. Suzanne Arena, founder of Decoding Dyslexia RI, warned that if these funds were not partly used to help early detection of learning problems, such as dyslexia, they would be “misappropriated”. She said there needs to be a better system to identify students who are struggling academically so that money is not wasted on more expensive remedial classes later in high school or college.

Wagner said, â€œWhat we call success gaps are actually opportunity gaps. We miss their unique way of learning. When we can relate students well to their learning style, they often excel in the classroom.

He mentioned that when it comes to teaching dyslexic students, the field continues to grow and find the best ways to identify and teach these students. Wagner believes that schools that take advantage of the empowerment plan will help achieve these goals.

â€œWe have enough talent in our system to meet the needs of all of our students if we just allow more flexibility in the system for schools and teachers to make these decisions. ”

Likewise, Wagner pointed out that many of the concerns raised by the public could be improved if they are not addressed by participating in the school empowerment plan.

Carolyn Higgins, a science teacher at Winman Junior High School who works on next-generation science standards, said that despite all the stress on improving STEM learning in the state, she doesn’t see the support. appropriate and sufficient professional development for teachers in the field. Higgins argued that elementary teachers, who often serve as science teachers in younger classes, are “uncomfortable” teaching the subject, but this is where the science foundations of students are built.

â€œWhat frustrates me is that we’re expected to do more and more of it, but we don’t see the money or the training for it,â€ Higgins said. â€œWe want new and improved science programs and yet we haven’t seen the same level of professional development or funding in this area as others. ”

Raimondo added that with CS4RI, schools would start to see funds allocated to professional development and science programs. She wants to continue investing in teacher training, but said: â€œMoney is not the only answer. We cannot keep spending money on fixing a problem.

She said Rhode Island makes one of the highest investments in education in the country, roughly matching what Massachusetts spends per student. Raimondo said it was about spending smarter and getting “value for our money.”

Gene Nadeau of the school committee argued that the city should receive more funding from the state, and Wagner and Raimondo said the state has reviewed and changed the funding formula and will continue to see ways to improve it.

Netcoh’s biggest concern was with PARCC testing. She said that with so many variations of the test and so many gaps in student scores, she thinks it is “dishonest and unfair” to hold teachers or districts to account. She called for a better test than PARCC to be used.

â€œBelieve me, we hold our students to the highest standards,â€ she said.

Wagner said the Education Department was “turning the heat” on test scores, teacher accountability and graduation requirements regarding PARCC because this was the first time the test had been used and the state is in a “period of transition”.

He assured Netcoh that the variations in PARCC are designed to be comparable and that the state is required by the federal government to have a test to assess progress, especially as the state has changed and increased its standards.

â€œThat’s not to say that testing isn’t important. We want to improve and I think we will see the test results improve year after year.

Victims of the education plan still feel the sting

Bernie Sanders becomes a supporter – and critic – of the Democrats’…