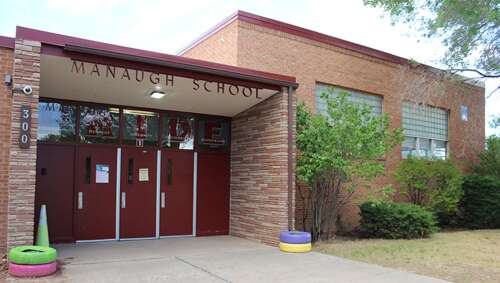 Manaugh Elementary, on the south side of Cortez, is facing a vote to close the school. (Jim Mimiaga/The Journal)

Faced with a severe staffing shortage in its schools, the Re-1 School Board of the Montezuma-Cortez School District is planning an emergency meeting Wednesday to vote on potential elementary school closures in Manaugh and Pleasant View.

On Monday night, Acting Superintendent Tom Burris met with parents and teachers to provide details of plans to close Manaugh Elementary School and transfer students to two other schools in Cortez.

Burris also plans to meet with parents and teachers at Pleasant View Elementary Tuesday at 6 p.m., the day before the vote at the school district administration office at 400 N. Elm St. in Cortez.

About 40 teachers, parents and school staff gathered at Kemper Elementary School on Monday to hear about Manaugh’s potential closure.

Burris said the school’s closure was being considered for two main reasons. The 60 year old building is in need of major repairs and upgrades. and it has 18 vacancies for teachers and para-teachers.

“It only had a lifespan of 50 years,” he said. “Of the three elementary schools, Manaugh is in the worst shape.”

It lacks sufficient heating and cooling, old pipes dispense cloudy water, and there is no fire suppression system, among other issues.

He said it would cost around $8 million to make all the necessary upgrades, which is prohibitive. A new school would cost $16 million.

“Given the state and the lack of staff, I don’t see what else we could do,” Burris said.

Pupils from Manaugh Primary School as they inaugurated an orchard in 2017.

To keep Manaugh open, it would probably need to be staffed with substitute teachers and alternative licensed instructors with degrees other than teaching.

Burris said such a plan would likely be unfair to students and unpopular with parents. Also, Cortez does not attract teachers because the salary is not competitive with other school districts.

According to a district proposal, if Manaugh were closed, 60% of its 229 students would transfer to Mesa Elementary and 40% would go to Kemper. Parents of Towaoc students enrolled in Manaugh could choose which school their children would attend, Burris said.

Kemper had 360 students in the last school year and Mesa had 333 students. Portable buildings would be installed to add classrooms to both schools.

School district boundaries and bus schedules would also be adjusted to accommodate the change, Burris said.

Class sizes would increase, he said, but the goal would be to keep students in grades 1 to 5 at 24 students or fewer and kindergarten at 15 students.

Schools in Kemper and Mesa are also aging and in need of repairs and upgrades, a parent noted at the meeting. The increase in student population would only increase attrition.

Burris said the community needs to answer the biggest question of how to provide adequate school facilities for the long term.

An audience member suggested building a new facility that would bring together all the elementary classes in the district. The idea would require voters to approve a bond. At least 35 acres of land would be needed.

It was unclear how the Manaugh and Pleasant View properties would be used or developed, school officials said.

Students and staff at Manaugh Elementary School decorated their hallways for their spring adventure in 2018 after students showed significant gains on state test scores.

The audience responds with questions

The closure of a primary is an emotional issue for a community, officials said.

Parent Frankiana Tsosie’s daughter would be a second-grader at Manaugh in the fall.

“She knows everyone and the staff know the parents. We live nearby and she can walk to school. Now she should adjust to taking the bus,” she said.

She also plans to enroll her daughter in Kwiyagat Community Academy.

“It’s unfortunate to have schools closed,” said parent Lauren Bradford, who has two young children who will eventually attend schools in Cortez. “Having classrooms in portable buildings is not the best.”

A better long-term solution is needed, she said.

Manaugh principal Robbin Lewis said the proposal to close the school was not entirely unexpected given its dilapidated state and the vacancies.

“It’s sad, but you have to face reality,” she said. “The community has decisions to make about the future of its schools.”

Lewis added that if the decision to close schools is made, students will benefit from experienced teachers in Mesa and Kemper. Additionally, these teachers will help mentor newly hired teachers who are just beginning their careers.

In emails sent to parents and staff, school district RE-1 administrators cited staffing and facility needs as reasons for the possible closures.

The case of financing

Last week, the school board voted unanimously Tuesday night to support Initiative No. 63, a potential November 2022 ballot proposal that would increase funding for public education in Colorado.

The district had nearly 50 vacancies as of June 21, a problem schools nationwide face when trying to fill positions before August.

“I think the board understands and recognizes our emerging need for qualified, licensed teachers, and what we need to do to integrate them into our district,” said Cyndi Eldredge, Re-1’s executive director of human resources. “And I also want to mention that it’s not just about the Montezuma-Cortez school district or the state of Colorado. This is a national shortage faced by all districts and schools.

Eldredge noted that teacher retention has been identified as the area of ​​greatest concern in the district’s strategic plan.

“We have a fantastic team of teachers here, and those who remain have stepped up and are doing everything they can to support and educate our students and work with us,” she said.

The district has taken some steps over the past year to attract and retain teachers, including moving to a four-day school week in January. On Tuesday, the board voted unanimously to approve an increase in staff pay scales.

For example, the base salary of a first-grade teacher with a bachelor’s degree would increase from $31,557 to $36,000 per year, according to the minutes of the April 5 special board meeting.

“From an HR point of view, do you find that helps? Board member Cody Wells asked Eldredge ahead of the vote.

Eldredge said there was a lot of appreciation for these measures, but given the “cost of inflation and everything else rising” it was still difficult to attract educators even with higher salaries. and shorter school weeks.

The district is working with the Public Education and Business Coalition on alternative licensing programs, Eldredge said, and Burris spoke about the district’s progress in implementing its “Grow Your Own” initiative, which aims to help members of the local community to obtain teaching qualifications.

Initiative #63 “would provide significant additional funding to public P-12 schools without raising taxes or tax rates by removing these funds from the TABOR limit calculation and directing a portion of these revenues already collected from the income tax to the Constitutionally Protected State Education Fund,” reads Resolution Re-1.

The Taxpayer Bill of Rights Amendment was approved by Colorado voters in 1992 and limits the amount of revenue governments can keep and spend. It stipulates that excess revenue must be returned to taxpayers and requires certain tax increases to be approved by voters.

According to the text of the initiative submitted to the Colorado Department of State, if passed, the proposal would transfer one-third of 1% of federal taxable income to the state education fund. The money would be “dedicated specifically to efforts to attract, retain and compensate teachers and student support professionals”, according to the text.

If Initiative No. 63 goes to the November 2022 ballot, the measure will take effect on January 1, 2023. The initiative requires 124,632 valid signatures to appear on the ballot, according to the Secretary of State’s website. from Colorado.

“I’m glad to see that there’s a resolution for Initiative 63 on your agenda tonight,” community member MB McAfee said in the public comment section of the meeting. “In light of everything our school district is facing, we definitely need more money, even if it brings us to some kind of sub-parity at best. It’s better than not having it. »