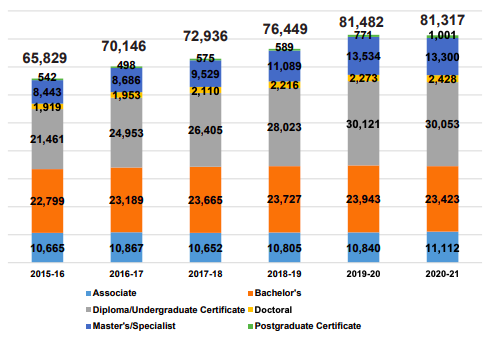 A new submission from the Kentucky Council on Post-Secondary Education shows that the number of degrees and diplomas awarded in the state has remained stable in the first year of the COVID-19 pandemic. The total number of diplomas and degrees decreased by only 0.2% in the 2020-2021 academic year and increased by 23.5% since 2015-16.

That’s good news for Board Chairman Aaron Thompson, who was quick to congratulate campuses for stepping up efforts to help students cross the finish line during a pandemic.

Total number of diplomas and diplomas, by level of diploma (CPE graph; click to enlarge the graph)

“The enormous challenges of the past year and a half haven’t taken us away from our ambitious goals for Kentucky, and it truly is a tribute to the resilience of Kentucky campuses and students,” said Thompson. “This is an encouraging sign for the future of Kentucky’s workforce as we continue to fight and recover from the economic effects of the pandemic.”

The dissertation details the number and types of degrees obtained in 2020-2021 at public universities in Kentucky, the campuses of the Association of Independent Kentucky Colleges and Universities, and the Kentucky Community and Technical College System. The annual report tracks progress towards the state’s goal of increasing the percentage of Kentuckians with a high-quality post-secondary qualification to 60% by 2030.

The brief showed that the degrees obtained by underrepresented minority students continued to increase. From 2019-20 to 2020-21, the degrees awarded to URM students globally increased by 2.3%. In the Kentucky Community and Technical College System, URM student degrees have grown faster than the overall total, increasing 4.3% from the previous year and 46.1% from 2015-16.

The campuses have exceeded the annual Kentucky five-year strategic program target for bachelor’s degrees among under-represented minority students. A total of 3,322 URM students graduated with a bachelor’s degree during the year, well above the annual target of 2,938. These figures are based on years of significant progress; in public universities, URM degrees have increased by 25.2% since 2015-16.

“These are staggering numbers in every way, but especially when you compare them to other states,” Thompson said. “We’re on track to close the education gap that is preventing Kentucky’s workforce from reaching its full potential. “

The number of students who received a STEM + H degree in Kentucky increased 2.8% year over year, a win for workforce development in Kentucky. Public universities awarded 6,724 STEM degrees last year, exceeding the target set out in the state’s strategic plan, “Stronger by Degrees,” which called for at least 6,620 STEM + H degrees to be produced each year. by the 2020-21 academic year.

• Total number of baccalaureates in public and private establishments fell by 2.2% in 2020-2021. The bachelor’s degree production fell by 3.9% at public universities but increased by 4.8% at AIKCU institutions.

The brief is available on the Commission’s website at cpe.ky.gov.

What to consider before choosing a pet insurance plan