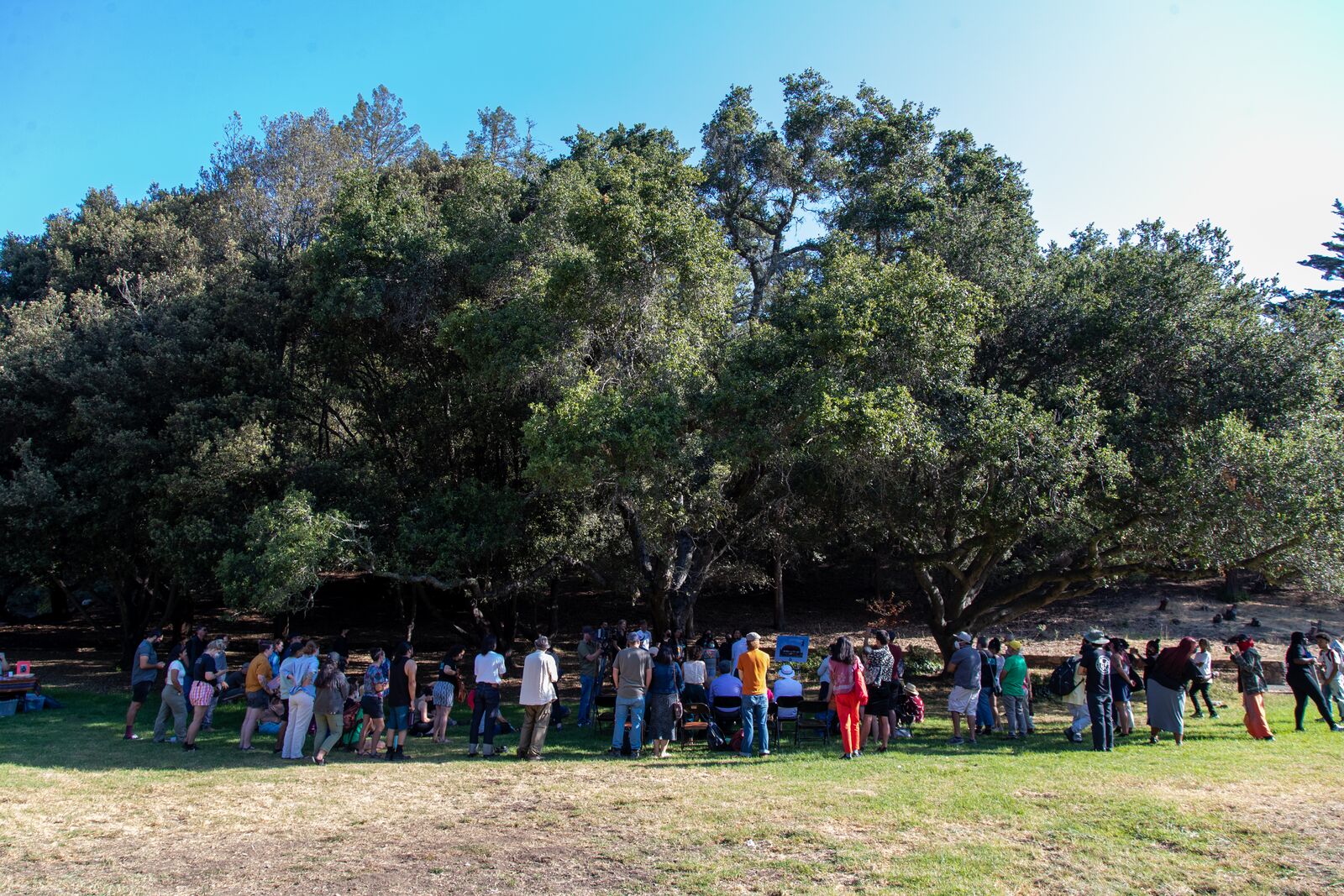 Oakland to Return Land Rights to an Indigenous Group

The City of Oakland plans to return five acres of Joaquin Miller Park to permanent Native control, in what is believed to be the first instance of a city returning land to Natives.

Under the proposed “cultural conservation easement”, Oakland would retain ownership of the designated area, but the Sogorea Te’ Land Trust would have almost total control over the use of the land, for cultural, environmental and educational purposes, in perpetuity.

“It’s a way for us to take this land and reimagine what it might have looked like,” Corrina Gould, co-director of Sogorea Te’ and tribal spokesperson for the Confederate Villages of Lisjan, said at a conference in press Thursday.

“We have a vision of a place in the hills that overlooks our territory, that holds us in a basket. It is a way for us to tell our story as the people of Lisjan and to involve our loved ones from all walks of life in the stewardship of this land,” she said.

The Sogorea Te’ Land Trust was founded in 2015 by Indigenous women who had worked for many years on efforts to facilitate the return of indigenous and sacred urban lands to the Bay Area.

The Joaquin Miller site restitution project has been in the works since 2018, when Mayor Libby Schaaf first met Gould after watching the documentary “Beyond Recognition.” Schaaf asked Gould if she saw any opportunities to give land back to Oakland. Sogorea Te’ members searched for a culturally significant location and focused on Sequoia Point near Skyline Boulevard, which features a flat, cobblestone vista with sweeping views of the city and bay, as well as a thick grove of trees. trees.

“Today we let the healing begin,” Schaaf said at the press conference, held in a shady spot above Joaquin Miller Road. “Today is the day we recognize the harm that government and colonization did to the original inhabitants of this land. The original sin of indigenous genocide that happened right here on this land was just the beginning of additional laws and acts of exclusion that have occurred over generations.

On Tuesday, September 13, City Council Member Sheng Thao, whose district includes Sequoia Point, will host a Zoom community meeting with the land trust to discuss the proposal. Eventually, the plan will have to be approved by the city council.

“When Corrina Gould first showed me this, my jaw dropped,” Thao said. “Not just because of the beauty, but what it means to give back the land. This is just the beginning.”

At the event, Gould unveiled a rendering of a structure being considered for the site, designed to look like an inverted Ohlone basket. Gould said the only remaining baskets used by the Ohlone people belong to the British Museum.

Other ideas for the land include seasonal ceremonies, replacing invasive plants with species native to the area, and opening an education center, land trust co-director Johnella LaRose told The Oaklandside.

The area will continue to be open to the public, and the hope is to make it a comfortable place for many people and communities who may currently feel unwelcome in the hills or the park, LaRose said.

“People don’t know this exists, so when they come they get profiled,” said LaRose, who is Shoshone Bannock and a member of the Ute tribe.

The deal between Oakland and Sogorea Te’ comes at a time of growing demands for reparations in the form of property being returned to Indigenous peoples. The United States Army and white settlers conducted a genocidal war against the tribes of California in the mid-1800s. A primary goal of this state-sanctioned violence was to steal land for gold mining, agriculture, and the building of settlements and cities . The surviving Aboriginal peoples carried on their cultural traditions and increasingly asserted their land rights since the 1960s.

Gould said she and her staff began working on “protecting sacred sites” in the Bay Area at a time when most residents were unfamiliar with the terms Ohlone and Lisjan.

“Who knew that over 20 years later, the earth would start coming back to us in pieces,” she said.

While nonprofits and land trusts have been facilitating land returns to Indigenous groups for some time, this appears to be the first time a city has taken ownership public, said Brendan Moriarty, who manages real estate. of the city and works on the easement. He said the deal will include protections against future city leaders who cancel the deal.

“We can come and go, but property rights are forever,” he said.

The city will retain the right to go to the lot in the event of an emergency, such as a wildfire or red flag day, and can help manage the property.

Schaaf noted that the city could eventually sell the land to Sogorea Te’, but said it would be a bureaucratically complicated process.

The easement plan has been widely adopted so far, said several people affiliated with the project, including the president of Joaquin Miller Park Friendsa group that works to preserve and improve the territory.

“We couldn’t be happier about this – they will be wonderful neighbours,” said Dale Risden, noting that the land trust shares the environmental stewardship mission of the Friends group.

Because Oakland is the first city to continue this process, Gould said she hopes the agreement serves as a “model” for others.

“My hope is to come back all over California, everywhere,” she said.