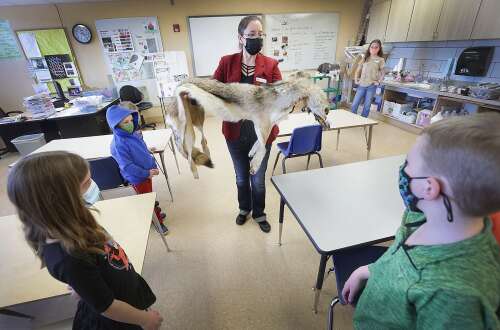 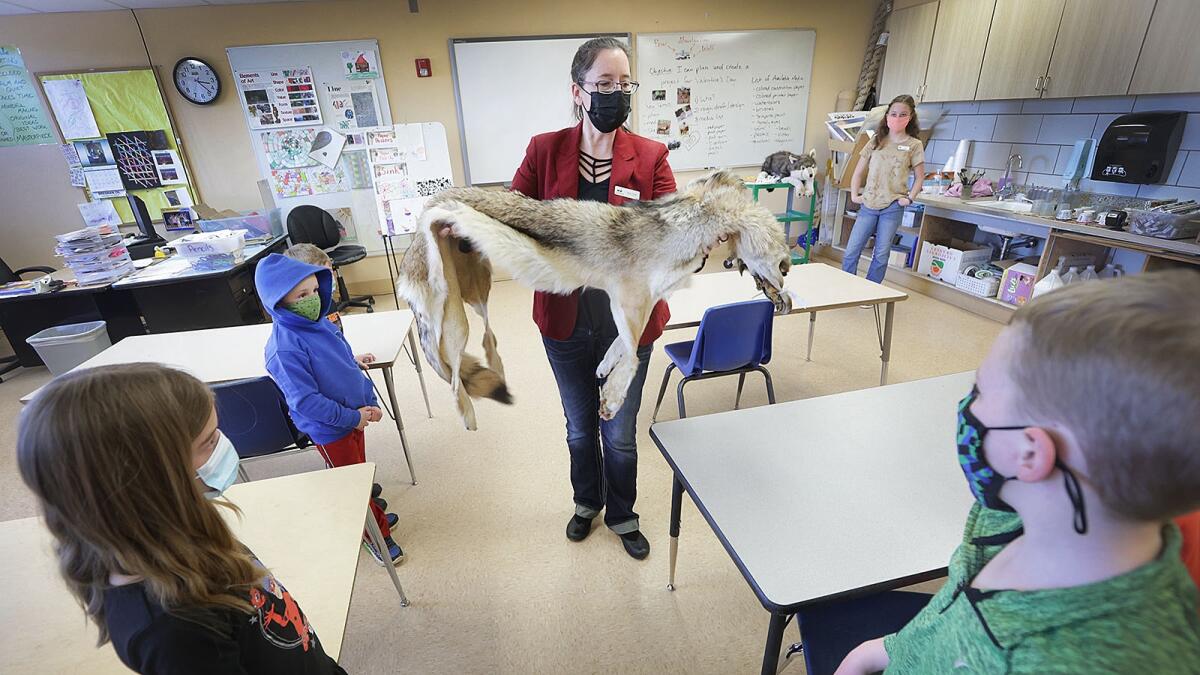 BREEN – Wolf howls echoed through the halls of Fort Lewis Mesa Elementary School on the afternoon of Feb. 9.

Carnivorous animals didn’t stalk the hallways, however. Elementary students learned all about wolves through a weekly after-school program, Enrichment with the Powerhouse, and on several occasions joined in a chorus with their peers to sing their best wolf howls.

Young students, ages 5 to 7, flocked to an empty classroom at Fort Lewis Mesa Elementary School around 3 p.m. after a short recess in the schoolyard. What awaited them inside weren’t regular class activities, but Teresa Craft, vice-principal of Powerhouse, and a number of artifacts Craft had brought with her for the weekly after-school program.

Durango 9-R School District has partnered with the Powerhouse Science Center and the Southwest La Plata Library District to provide after-school enrichment activities directly to students at Fort Lewis Mesa Rural Elementary School. The after-school program is a huge hit with students and their parents, so much so that nearly half of the students attend weekly rallies.

It can be difficult for parents whose children attend Fort Lewis Mesa Rural Elementary School to juggle full-time jobs and their children’s school schedules. It’s a big commitment for parents to ferry their kids 18 miles to Durango, where most of the learning opportunities are, and then bring them home to the quiet countryside. 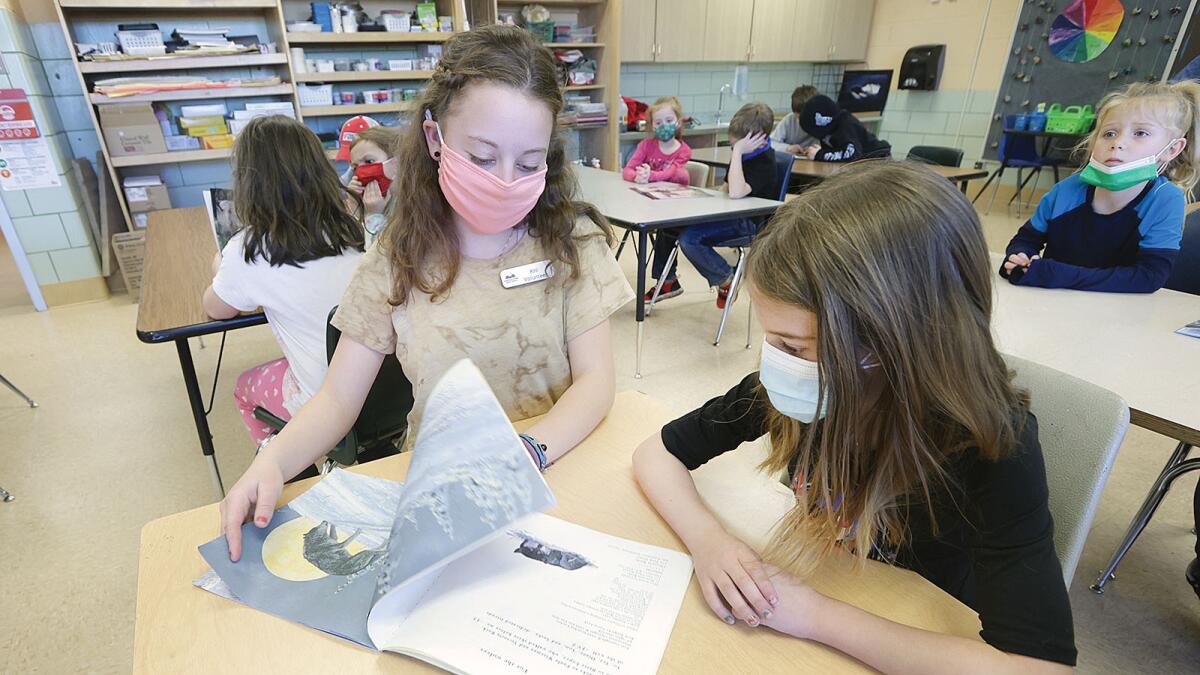 Superintendent Karen Cheser brought the library and power plant together to create a relaxed learning environment for children after school hours. The powerhouse and library also work with Sunnyside Elementary School, Craft said.

Powerhouse staff have been running an after-school science program at Fort Lewis Mesa Elementary School for about five weeks, and the project is expected to continue through May.

The thing is, it’s a total hit with the kids.

“The response from parents and students has been incredible,” said Chris Conrad, the library’s brand manager. “They are hungry for something to do for their children here.

“All the kids in town can just go to the power plant whenever they want,” Conrad said. “It’s much more difficult for children here. You have to make a deliberate choice to go to town to do this.

Then the power plant got involved. 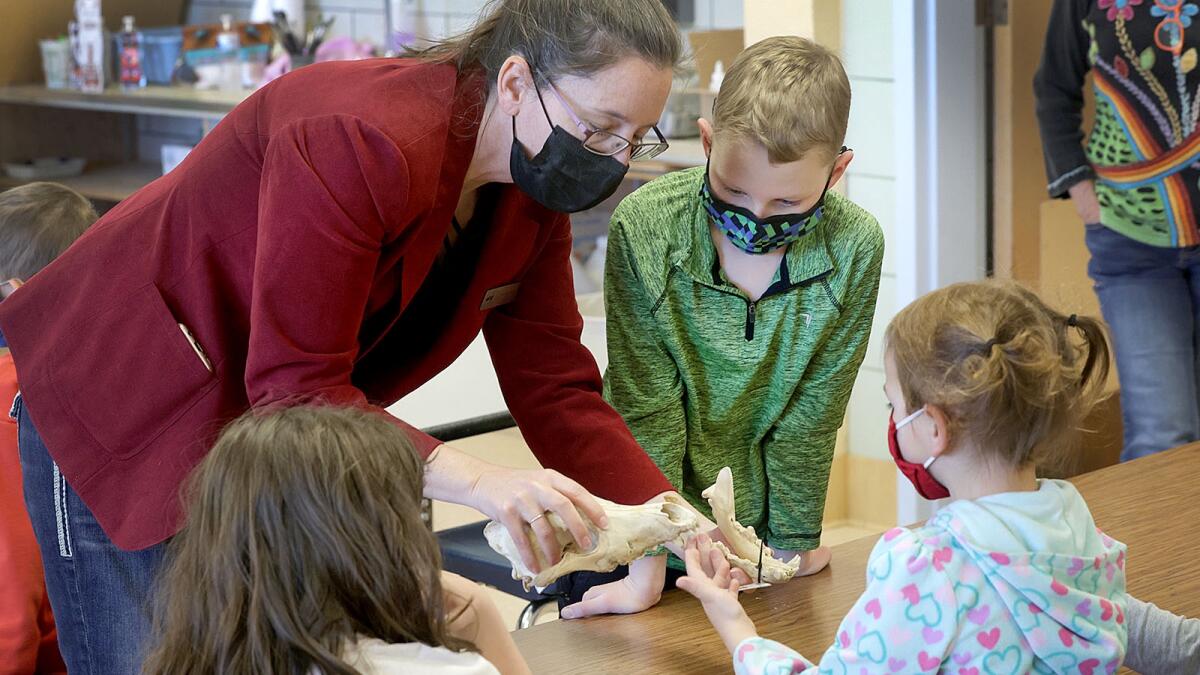 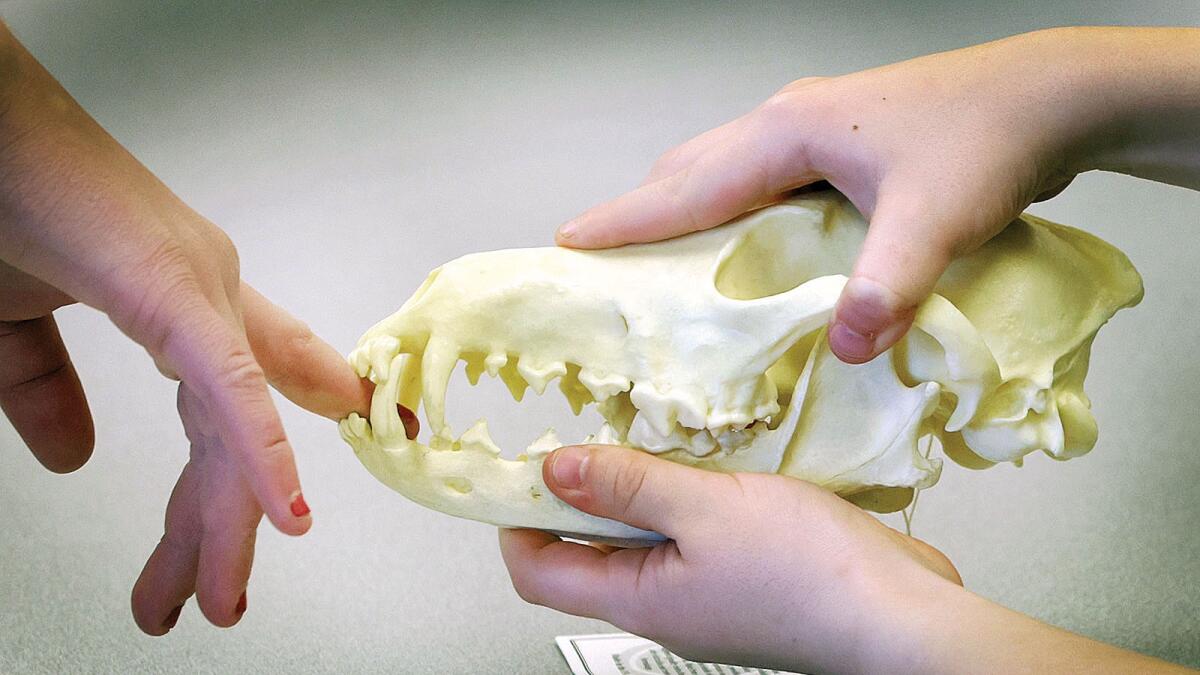 Library manager Liz von Tauffkirchen said the program started with one staff member for Fort Lewis Mesa and Sunnyside, but the popularity of the program led the library to hire more staff to meet the levels of ‘interest.

“And especially at Fort Lewis Mesa, it just exploded,” von Tauffkirchen said. “We had so many kids that we ended up hiring more help because 40 kids is a lot for both of us to deal with.”

Von Tauffkirchen said STEM (science, technology, engineering and math) programs tend to be fun and engaging for kids, and there aren’t many recreational activities for young people in the Fort area. Lewis Mesa, So After School Program offers parents activities in a safe environment to occupy their children.

Fort Lewis Mesa Elementary School students watch wolf droppings last week during the after-school Enrichment program with the Powerhouse. Elementary students talked about the prey of wolves, such as beavers, deer, elk, and occasionally cattle, as well as the types of animals that might prey on wolves, such as bears and cougars. (Jerry McBride/Durango Herald) 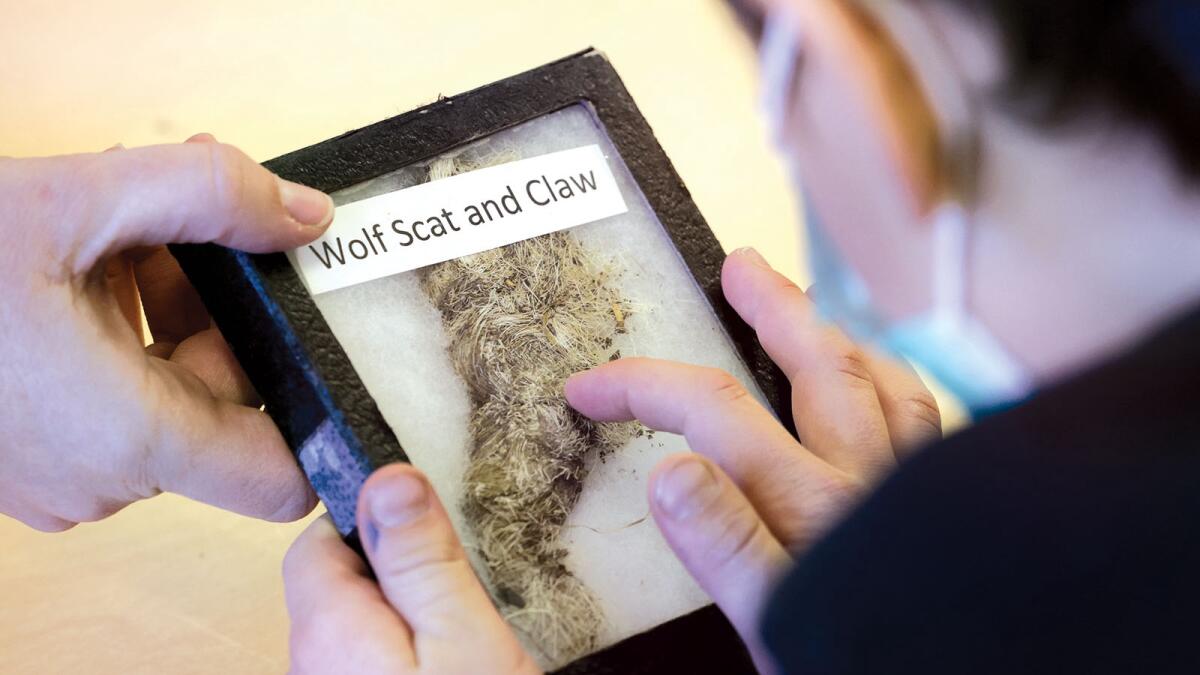 Primary students are divided into two groups, older and younger. Every Wednesday, a Powerhouse employee visits the children from 2:30 p.m. to 5 p.m. Each week, staff members try to tackle different and interesting scientific topics.

One day the students learned about evolution and anatomy. Children glued uncooked spaghetti to a piece of paper to model the bone structure of whales, dogs and humans, Neil said.

In another session after school, they studied architecture. Conrad said the kids practiced their architectural skills using marshmallows and more spaghetti. They were challenged to build the tallest and strongest structure possible using the foodstuffs.

She said the Powerhouse tries to introduce young students to deep science concepts and vocabulary. But it’s just an enrichment activity, she says. So there’s a lot of hands-on fun.

Extracurricular programs for older students are meant to be a bit more challenging, but both groups of students generally cover similar subject matter.

“We meet the kids where they are,” Conrad said. “They are not on screen. They interact. They think and do stuff, but they don’t have to go to town. 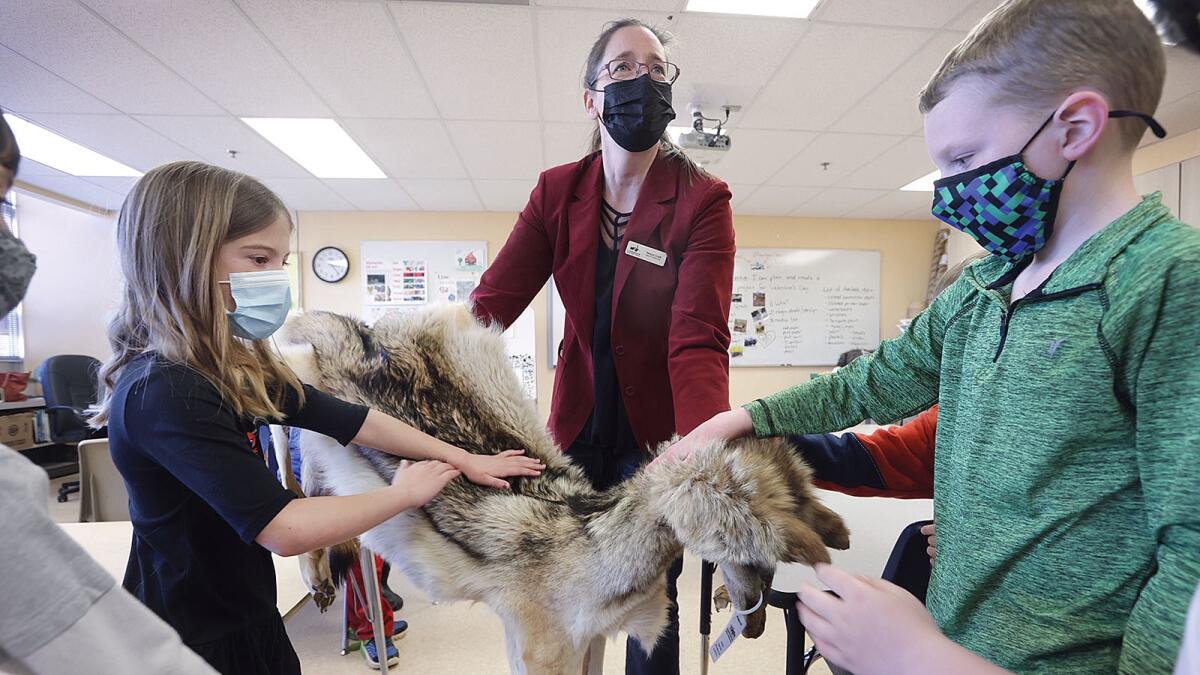 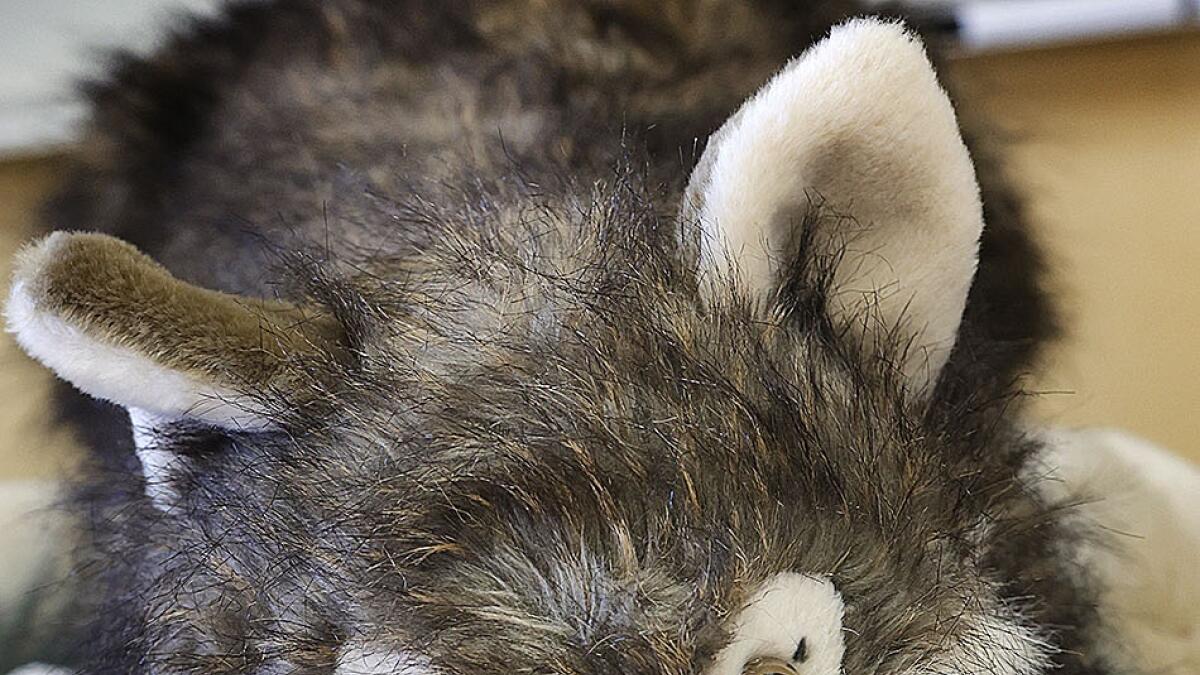 The subject of wolves originated as part of the Powerhouse’s current exhibition, “Living With Wolves”.

Craft presented his lesson plan for the afternoon.

“First, we’ll start with what they (kids) generally know,” she said. “Which is always fun because you never know what kids might say. Then we’ll talk about what wolves eat and what wolves eat.

She then asked the students what happened to the ecosystems when the wolves were removed.

“Because they’re small kids and they need a lot of movement, we won’t talk about them for so long,” Craft said. “Then I have real skulls, skins, excrement. Next I have the tracking collar, so we’ll get the real artifacts out and let the kids manipulate them for a bit of movement.

“Next, we’ll make a really fun wolf mask and practice our wolf howls, much to everyone’s delight,” she said. “Then I have wolf stories that we’ll read at the end if we have time.”