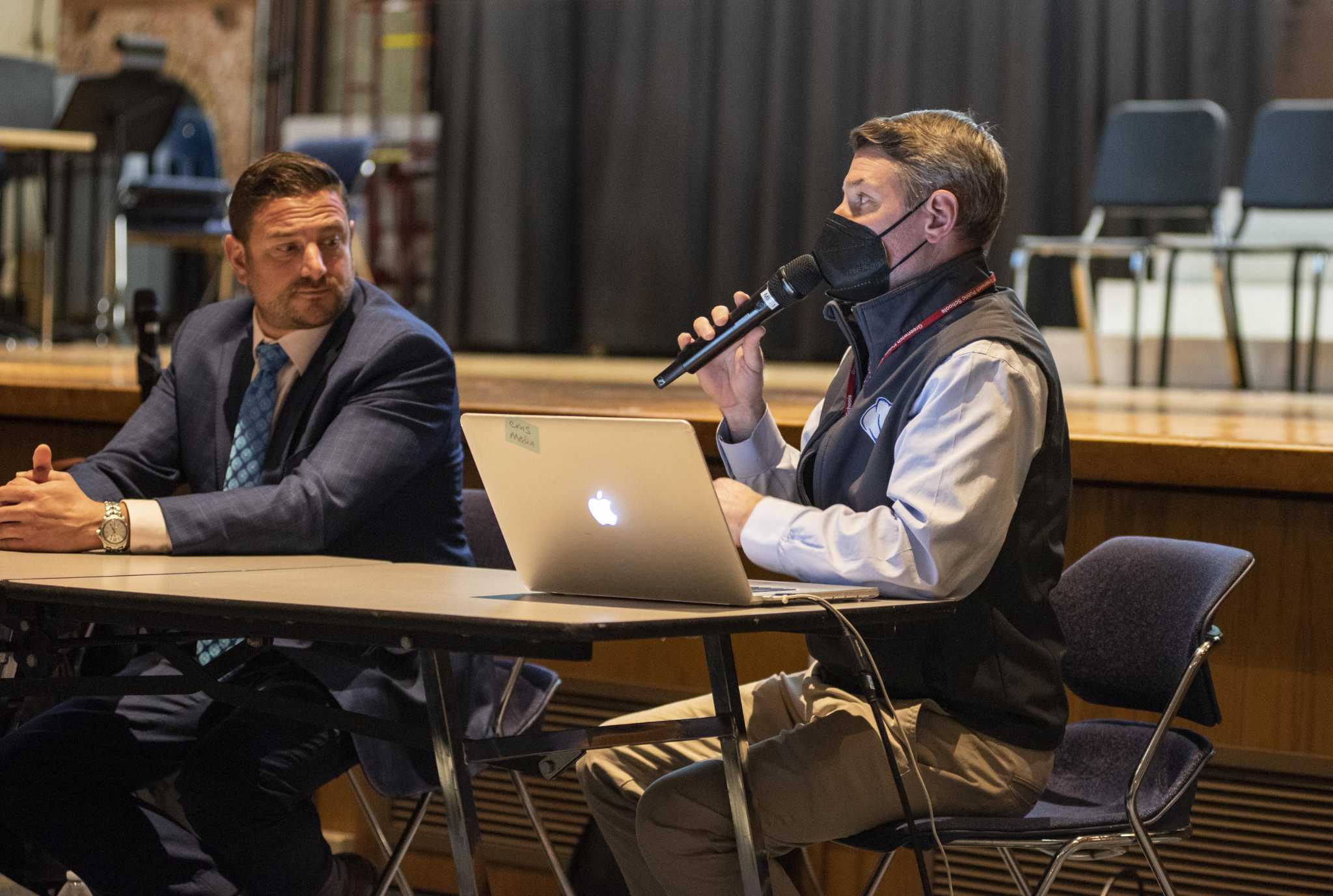 Should redistricting be factored into plans for the new Central Middle School? Greenwich School Board wants more details

But nearly three months and four different designs later, the Board of Education isn’t ready to approve a full plan.

The board members were unhappy with the fifth iteration ahead of them as they met virtually Friday morning; the debate centered on the size of the building and the lack of confidence in those who would take the rough plan and build a building that would last in the neighborhood for the long term.

“Somebody already designed Central Middle School, and I’m not really happy with the design they did,” said board member Joe Kelly.

“I’m concerned that if we hand over control, or if we don’t address this issue early on, the design may slip through and maybe someone who thinks more about doing it within budget and low cost could have more control over the process and not really make a significant building. Those are my fears,” he said.

Since Greenwich is applying for a state grant to reimburse up to 10% of its costs, the board will also send the education specifications to the state to approve the grant application and calculate a reimbursement rate.

The state Department of Education will determine its reimbursement rate based on several criteria, including whether the square footage is suitable for the largest number of students expected to enroll in the school within eight years. . The maximum reimbursement rate is tied to being at or below the area needed, officials said.

The district estimated its highest projected enrollment at Central would come this fall with 511 students.

But during the debate, members heard another number: CSG COO Roger LaFleur said the most recent plan’s ed specs show the total square footage could accommodate 600 students, but he didn’t say whether the classroom space is enough for this large of a student body.

The Board of Education already plans to build larger than what the state will reimburse with a 550-seat auditorium, recreating the current space in Central that serves as a meeting place for the Greenwich Representative Municipal Assembly.

“This is the first time I’ve heard that we’re going to reach a capacity of 600 students. You know, we’ve all been focused on this 511,” said board member Christina Downey. “That for me, gives me a lot more comfort; I don’t know about my colleagues. Going back to my whole notion of the building being properly sized, this is probably close to where Central sat at its highest points.

In previous meetings, board members discussed whether a taller building could alleviate overcrowding at the college and that discussion also overran much of the group’s hour-long meeting on Friday.

“Nine years ago I took over programming at Western Middle School, and the school had 503 students; as we know, Western now has 640 students,” said Central Middle School principal Tom Healy. “While the numbers have increased in the three years I’ve done the calendar there, it becomes a challenge because you really use every space.”

He said teachers had to vacate their classrooms during their planning period to allow another instructor and a class of students to use the space.

“Because if we ever (redistrict), we really need to make sure our three buildings could handle the capacity of what Eastern is right now,” she said. Eastern Middle School has 818 students, according to state data.

She said it would be prudent to discuss the size of the building with other city agencies, and she set herself the goal of approving a specification by “July, at the latest.”

Once the ed specs are approved, the construction committee, which Stowe says will be announced soon, can begin work.

Kelly argued for more control of the school board in what the committee decides.

He recalled an old Board of Education process that gave the board more control over design decisions, saying he wanted to have renderings to show voters and other stakeholders.

Downey reassured him that the board had even more approvals as the trustees’ and officials’ dreams worked their way into the plans.

Kelly was one of the few council members to attend a meeting seeking community input on the project. After the low turnout, he asked the board how else they could engage the public, and he demanded to be more involved in the specs of education himself.

He then attended a meeting between staff and consultants at Central Middle School and took a calmer tone at the next meeting when he heard that the school staff were satisfied.

Although Kelly voiced his concerns the most, he wasn’t the only member who wanted to give the building committee more direction.

“I’ve been on two building committees, and I know I’ve pushed on that, but the more detail the better,” Downey said. “I think if we’re comfortable with the size, which I’m now comfortable having heard this conversation, then I would start focusing on the details that we can send to the construction committee.”

“I just don’t want to be put in a position where we rush to have… the first round completed and realize after the fact that we still have issues to resolve or that the administration of Central has issues or areas that need to be addressed. discussed,” said board member Karen Hirsh.

Board members constantly sought more information from CSG consultants between board meetings, asking questions about instructional specifications via Google Docs. Among their concerns: landscaping, energy efficiency and the ability of water fountains to fill water bottles.

The last batch of questions, posted at the end of a 42-page online meeting agenda documenthave a recurring answer: not yet – or, more precisely, “the state does not require this level of certainty at this stage of the process”.

LaFleur said Friday that the level of specificity varies between boards, but the current document is generally sufficiently detailed.

Debate over the ed specs will return to the board when it meets Thursday night, but board members said they don’t expect to vote.

Life insurance has an inclusiveness problem